The day started with 4 fitful hours of sleep on an airbed mattress and an early start of 0415. Heading down to St Pancras at crack of dawn we got the 0454 train to Gatwick which lurched it’s way down south before intermittently stopping short of Streatham before the driver told us the automatic breaks kept on applying and he had to restart the train.

A few more stops later he told us that this particular train had reported issues before and that we’d be lucky to keep going at any reasonable pace. By this stage it was touch-and-go whether we would be able to get to Gatwick by taxi in time to drop our bags but others passengers decided to take matters into their own hands and pull the door open handle further delaying any remaining people on the train!

Having to catch the 0454 train bleary-eyed

After eventually arriving at Croydon we transferred trains and kept on our way to Gatwick but arrived 12 minutes after the check-in desk had closed. We had to laugh that on a 7500+km train journey the first leg of 40km had been a dismal failure!

Regrouping our hazy morning thoughts from Gatwick we were able to book a flight though Eugene leaving Heathrow around lunchtime the same day so we headed off on a National Express transfer bus at 0700 with coffee and pastries in hand. 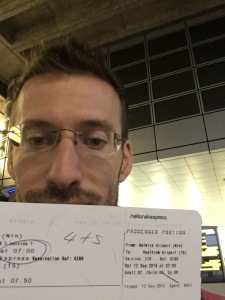 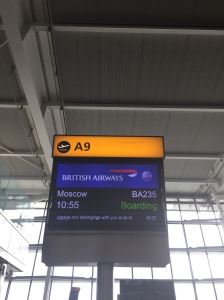 Off to Moscow finally!

Flight to Domodevo was uneventful and we got the train into town and the metro on from there but finding the hotel was a bit of a challenge as, although correct on the map, had no sign visible and only a small plaque to indicate the right door. 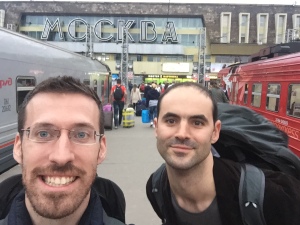 Hotel Veliy was a converted old building with dimly lit massive rooms but with a super power shower capsule with FM radio and horizontal jets – this was quickly named ‘The Soyuz Capsule’ for the rest of the trip.

Having quickly showered and changed we headed off for dinner down by Red Square in a local Russian chain called Teremok which does filled pancakes, we tried the meat and mushroom and also the red caviar version along with some beer in a department store foodhall which took us some time to find with us going around in circles.

Afterwards we decided to check out the bars and went in search of 12 Volt which was back on a street we had walked down earlier, after asking around and scratching around the side streets we eventually alighted on a black door with a buzzer with music coming from behind it. We went downstairs only to be followed by a gaggle of rough looking lesbians going for their Friday night lesbian night! 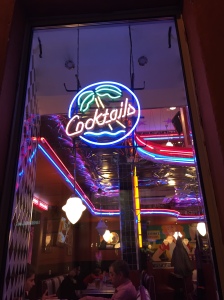 One of many false dawns for Moscow drinks!

We hightailed it and decided to check out Ice bar instead which Google Maps unfortunately placed completely off base as a tourist agency! We recuperated with a martini in the Intercontinental before heading on to the actual Ice bar which was a sight to behold.

Down underground was a bar and dancefloor covered with polystyrene balls to simulate the effect of snow, there were even snowdrifts which somehow managed to get everywhere into shoes, socks, soles of shoes – everywhere. 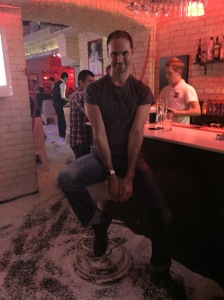 Although the bar customers weren’t a chatty bunch – their English being as good as our Russian there were a few characters. The drunk man challenging myself and Tim to an arm wrestling match on the glass tables before the bar manager intervened to prevent what was clearly going to end in a mess. The other sunglassed-covered mess beside us at the bar was somewhat haughty and moved around the bar with a selection of books which he then proceeded to read.

After a few G&Ts we called it a night and headed home to recuperate after finally managing to make it to Moscow as planned.