Few countries are so wholly defined by their location as Panama. Originally part of Colombia the residents were encouraged by the USA to break away and in return for quick recognition the US got control of a narrow strip of land 5 miles wide on either side of the canal mid-line known as the Canal Zone.

At the time of course there was no canal – just what remained of the failed French attempt some 20 years before. That effort had failed amid much death as mosquito borne diseases killed a large part of the workforce and was a reversal of fortune for the project lead who had been famous for previously building the Suez canal.

The Americans were to take a different approach although to begin with the project lead was tasked with ‘making dirt fly’ – realising a sea level canal would be impractical they designed to dam rivers to create an artificial lake and build a system of locks to raise and lower ships to the lake level.

Key to success was the by the chief medic taking on board the new theory of mosquito borne disease transmission – he was considered something of a crank for holding this view but set about systematically spraying and killing mosquitos across the zone. People would be fined if mosquito larva were found in still water where they were living. It paid off as the instances of yellow fever dropped dramatically.

Landing in Panama Airport with a 7 hour layover I quickly hired a taxi to get to the Miraflores locks visitors centre on the Pacific side. Just as we arrived a large car transport was slipping into the locks with only inches to spare. So important is this sea-route that ships are specifically designed to maximum specifications to fit through – Panamax.

The problem is that ever larger container ships can no longer pass through the current lock system so a new set of wider and deeper locks are being constructed a few kilometres away which will increase traffic and also the size of ships – now called post-Panamax. 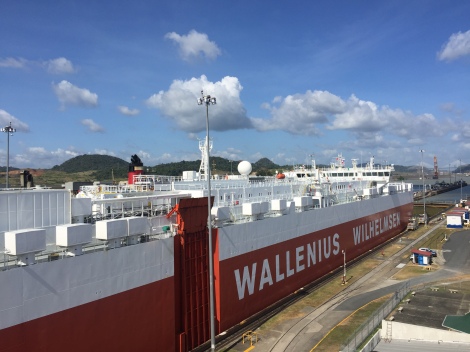 Panamax car transport making the transit with inches to spare

Watching the delicate process of an enormous ship being towed by tugs on rails to within inches of the lock walls is a strange industrial ballet. 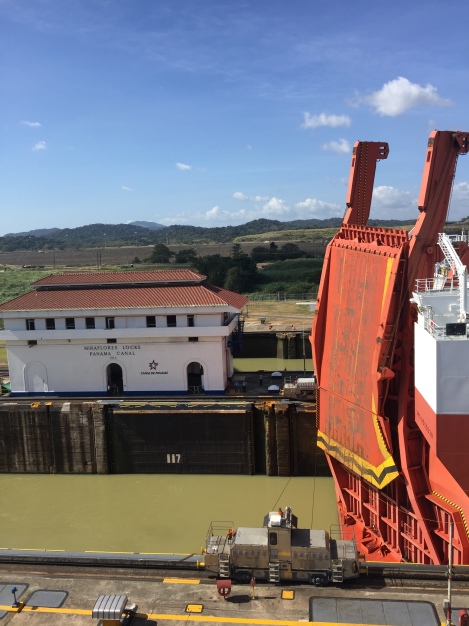 Tugs are constantly moving back and forth to align the ship

Special pilots go aboard the ships to take control from the crew for this critical part of the transit. On the Atlantic side there is another set, the Gatun locks, which will lower the ships down to sea level again. 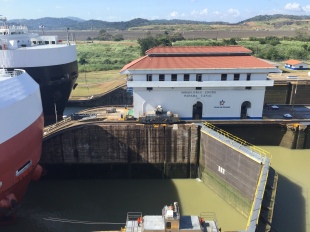 Miraflores locks on the Pacific side

Gates and mechanism over 100 years old

Amazingly the locks and gates in use today are the same gargantuan structures built over 100 years ago.

Then it was on to Panama City which is an odd mishmash of the old quarter and a strip of skyscrapers and oddly shaped buildings dotted along the Pacific shore. Surely none of this would exist but for the canal itself.

There wasn’t too much time to contemplate the ins and outs of Panama city as it was back in the car to the airport to the mother of all waterways – the Amazon!