I set off at 0630 to arrive in the town of Kourou where the Guyana Space Centre is based early on the day before launch. This was to catch the morning ferry to Les Isles Du Salut (Salvation Islands).

Ironically named these three small islands 15km off the coast were a penal colony for almost a century witnessing disease, illness, cruelty and the guillotine. Although the last prisoners were sent in the 1930s incredibly the prison wasn’t shut down until the 1950s, due to domestic and American pressure.

The most famous of the three is Devils Island which was the destination of political prisoners such as Alfred Dreyfus. Other famous residents include Papillon though these days the only inhabitants are the monkeys and those who choose to stay overnight at the pricey hotel.

One can stay in the old guards houses or sling a hammock in the prisoners quarters but many of the other buildings are crumbling reminders of their past. Palm trees and tropical forest have moved in to reclaim much of what was left behind. 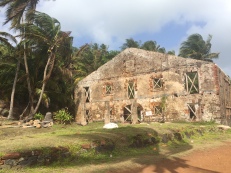 An hour catamaran ride away the island is now under the aegis of the Guiana Space Center – they have a large infrared tracking camera there to track launches. The islands are directly under the trajectory and so are evacuated the day of each launch.

I was able to wander around the eerie confinement cells where no direct light permeates and the four blocks which the guillotine was placed on are still there – all quite eerie. 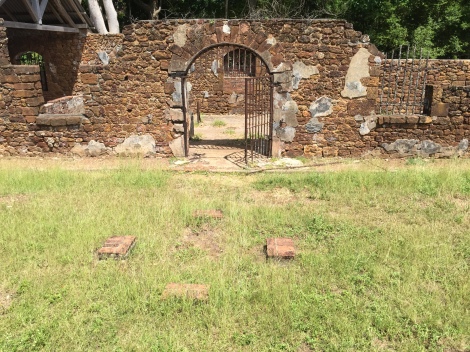 The islands were considered inescapable due to the strong currents and shark infested waters surrounding them. One area was safe for swimming and I was joined by a sea turtle bobbing up and down in the calmer waters clearly enjoying the break from tough swimming!

After a restorative G&T it was time to head back to sleepy Kourou. There isn’t much to distract in the town itself – even finding a shop open in the evening is something of a challenge!

The launch day itself started ominously with a tropical rainshower but cleared up nicely toward the 20.20 launch time. We were instructed to present ourselves at the town cultural centre no later than 17.30 to collect our passes and board the buses. I was assigned to the Agami viewing site. 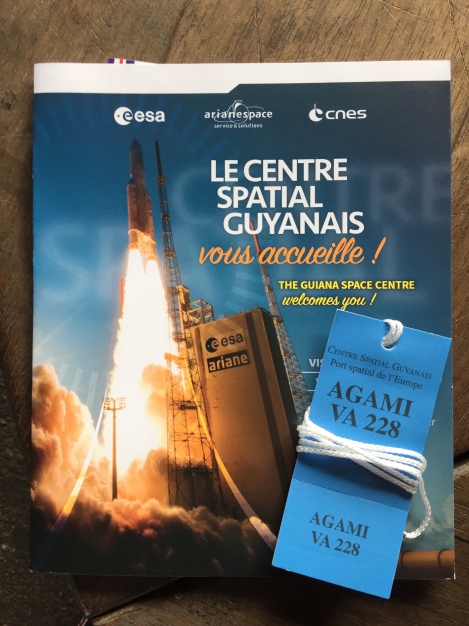 With 12 launches last year the setup was a well-oiled machine and very professionally done and all for free.

There are multiple sites (Ibis, Agami, Toucan, etc.) all seemingly named after birds with the closest being 5km away and mine being 7.5km. After some waiting we boarded one of nine buses and started off in convoy. The site itself is essentially in the middle of a jungle down a 10km mud road. 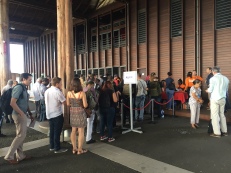 Must have been a few hundred registering for Agami

Off on the 45 minute bus ride to viewing site

There were two gazebos setup with large screen with live commentary from the Jupiter control centre and down a corridor cut through the forest was the rocket and launchpad lit up bright white in the distance. 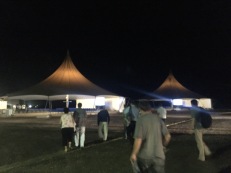 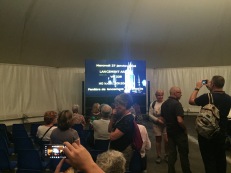 It’s at this point I really regretted not having a better camera than the iPhone! I could see perfectly well through my binoculars but low light shots of distant objects just weren’t happening.

Sitting around the side of the site were a troop of armed soldiers with trucks and half-track tanks not to mention army helicopter surveillance runs. I presumed they were there to protect us but more likely to protect the rocket should any visitors go AWOL!

The video commentary started 30 minutes before departure with some safety info about what to do if we are told gas masks are required and then about the satellite being launched (Intelsat 29e – a broadband provider for North America and Atlantic – for ships, planes, etc.) and it’s voyage to French Guiana.

As countdown progressed the crowd gathered and silence descended as the countdown began – just at this point, almost on cue, it began to rain slightly.

At zero I could see plumes of grey smoke billowing out as the main Vulcain engine started. Seven seconds later during which computers have checked everything is working correctly the two solid-fuel boosters are ignited and an enormous bright yellow fireball erupted. The dark night turned to day and Ariane rocket lifted off with a thunderous roar to the sky. After some time I could feel a slight raise in temperature from the radiated heat even at 7.5km!

For better quality here is the live stream version

It was a spectacular sight and difficult to comprehend how so much power and force can be controlled with such precision. Within seconds Ariane was blasting away up through the clouds trailed by an enormous cone of fire out East over the Atlantic, continually being tracked by the various stations in Guiana, Brazil, Ascension Island and Kenya. 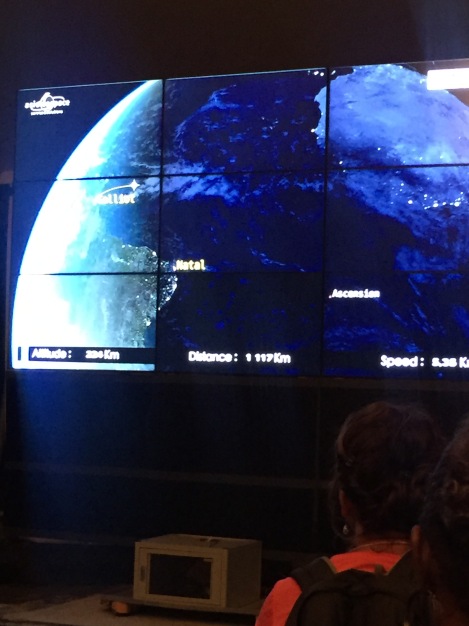 Heading out over Atlantic

Once out of view it was back to the video wall to see the various stages of the flight as the boosters fall away and the second and upper stage propels the payload to escape velocity above 8km/s. We could see it streaking across Africa before releasing the satellite after 29 minutes to its initial orbit from where it will work its way to a position over the equator around 50 degrees west and in a geostationary orbit.

Quickly it was over Kenya where I would be in a few months!

After a few speeches from the control centre (amazingly this is the 70th successful Ariane 5 launch in a row) it was on the buses through the space centre, past the launch pad and back to the hotel.

When checking out the hotel manager asked if I spoke English and I said I did – she then offered me a Jilly Cooper novel that some other, shameless, guest had donated. I politely declined thinking I had enough explosive drama for one day!

The next day I headed down to the Space Museum to see a life-sized version of Ariane 5 and some exhibits about the spaceport which was informative but text heavy. 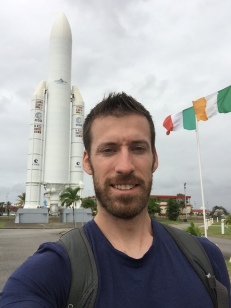 Ireland contributes 70m euro so we get a flag

Before long I was headed back to Cayenne and the airport for my flight – or so I thought.

Arriving in what I thought was plenty of time I saw on the departure board the flight one hour earlier. I ran to the checkin desk where the agent was finishing checking a few people but refused to do mine despite my pleas and most flattering French. Despondent I went to see what my options were and I realised I had booked the flight for the wrong month so she wouldn’t have been able to check me in even if she had wanted to!

The next flight would have been in four days but I managed to find a Suriname Airways flight at 3am that night which meant an 11 hour wait. Now Felix Eboue airport is a fine small airport but not the sort of place where you want to spend that amount of time. In the end I settled in the corner of a café with Netflix on wifi and worked my way through Narcos until eventually blurry eyed I joined the flight and arrived in Belem, Brazil at the ungodly hour of 5am but happy not to be stranded in French Guiana and back on track!