It’s a four hour bus journey through the desert to the city of Esfahan. There is a saying in Persian ‘Esfahan nesf-e jahan’ or ‘Esfahan is half the world’ and it’s certainly the nicer half with pleasant squares and gardens laid down 400 years ago.

Barren desert from Kashan to Esfahan

The central Imam square which is second only in size to Tianamen and much more pleasant I can say.

It hosts the great Imam Mosque on the south, the bazaar on the north and the Qapu palace and Lotfallah mosque adorn the other sides. Both the square and the mosque used to be prefixed by Shah instead of Imam – after the revolution it seems the religious authorities did a search-and-replace on placenames. 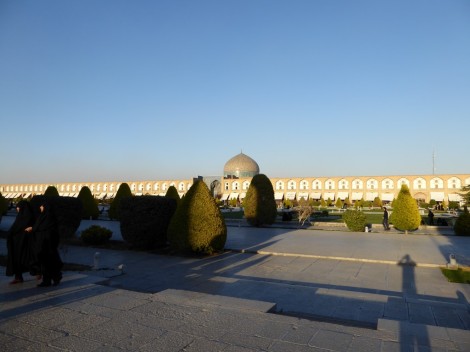 The scene is completed with manicured trees, horse-drawn carriages, awning-fronted shops and families picnicking on the grass.

I had a wander through the bazaar where among the plethora of cheap Chinese goods were the spice merchants, copper-ware shops and of course the carpet sellers. They are able to say hello in every language even ‘Cead Mile Failte’ – I promised to buy a carpet if they could sell it to me through Irish and they laughed and let me be. Unlike Egypt the sellers are pretty benign and I suspect sell more carpets over a cup of tea and biscuits this way.

Some of the handwoven silk carpets are just beautiful but given I didn’t have space or an apartment to put it in so I was relegated to window-shopping.

I met a retired schoolteacher and we got chatting and he brought me to the largest mosque in Iran the Jameh Mosque and pointed out in the decorations the stylised names of Allah and Ali (a key Imam in Shia history) repeated over and over the tiled façade. 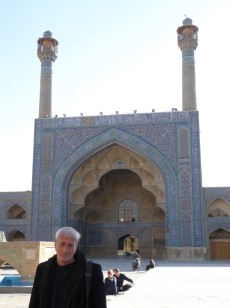 Back down in the square I decided to visit the beautifully sky-blue domed Lotfallah mosque in the afternoon. Graciously proportioned and set off the square the inside has a magnificent dome with every surface covered with detailed geometric blue patterned tiling. While not the largest mosque I visited in Iran this one was for me the most understatedly beautiful. 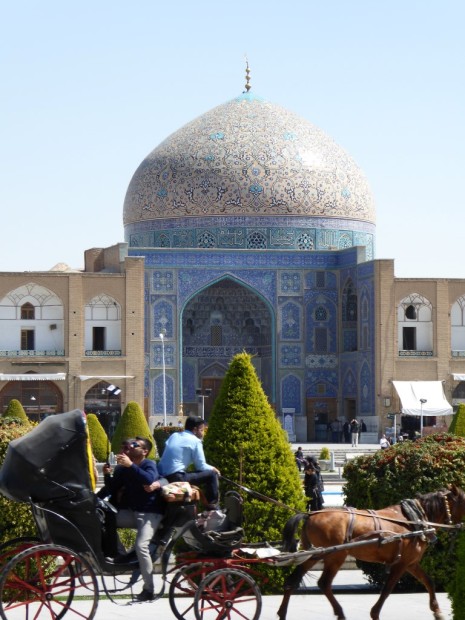 Far larger and grand is the Imam Mosque which dominates the south side of the square. Two towering minarets and an incredibly detailed portico lead into a large open square. The enormous dome is so perfectly constructed that at the centre point any sound is echoed over 40 times – although humans can only distinguish about 12. A man stood and started singing prayers which filled the whole complex through this natural loudspeaker. 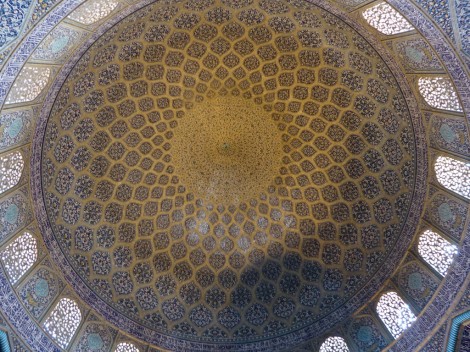 On hand was a local cleric who warmly advised me he was there to answer ‘simple questions’ I may have about Islam – I didn’t venture too far off the basics!

After, in what was to become a daily routine, I retired to the courtyard of the Abbasi Hotel to the teahouse to have tea and dates at dusk. 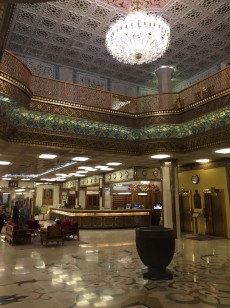 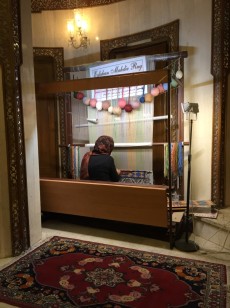 View from the tea house

A persimmon and fountain garden is an oasis of calm, the traffic and noise outside giving way to sound of birds singing and the call to prayer just after sunset.

One response to “Esfahan”