Yazd is said to be one of the oldest continually inhabited places in the world and nestled between the two great deserts in Iran.

Leaving Garmeh behind early morning I travelled with Patrick, a Frenchman who was also staying in Ateshooni. The owner of a restaurant outside Marseille he was able to take two one month holidays each year to off the beaten track places like Papua New Guinea and Ethiopia. A keen photographer he would hang pictures of his travels in the restaurant for customers to buy which part financed his travels. An amazing way to travel but I’m missing the key bit of the restaurant!

Staying in the old town it is a complete maze of high mud brick walls with only the high minarets for direction finding. 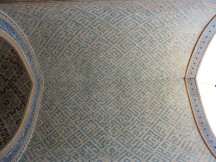 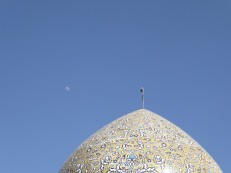 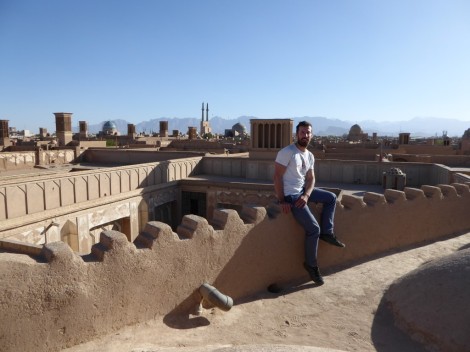 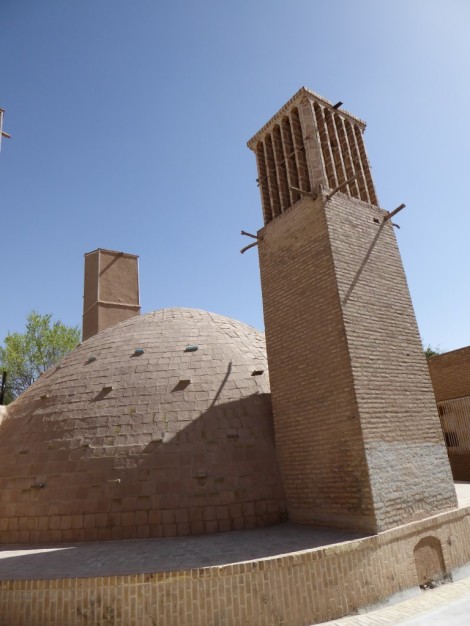 Badgir feeding cold air down to a water reservoir

These catch and direct any breeze down into a cold store of building and are surprisingly effective natural air conditioning. At sunset the orange light compliments the mudbrick buildings perfectly.

A little north of the old city is a fine pavilion and garden setup with the largest badgir in Iran. Along with 8 other gardens this is listed as a UNESCO world heritage site. Since these are all examples of classical Persian garden layout it was similar in nature to the Fin garden I had already seen in Kashan but worth a look. 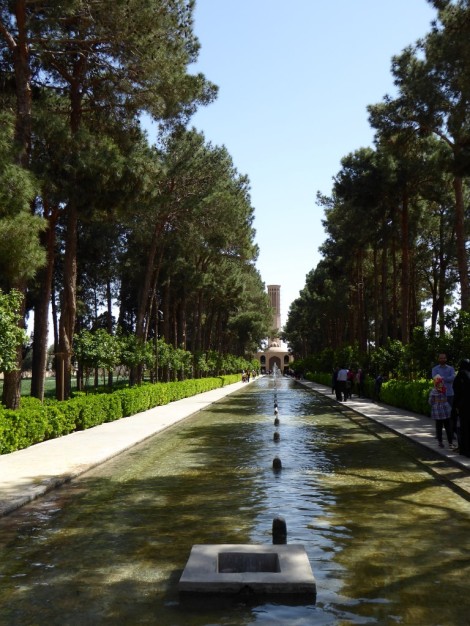 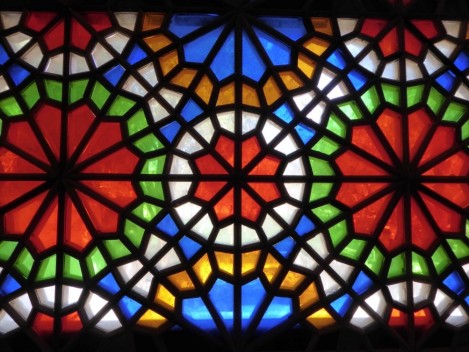 Stained glass in the pavilion

Myself and Patrick teamed up with a pair of German friends to head a ten minute cab ride out of town are two ‘Towers of Silence’. It is here that Zoroastrians used to bring their dead. The religion of Zoroastriarism originated in ancient Iran around 1100 BC and their beliefs include that the dead should not be buried as this contaminates the earth. 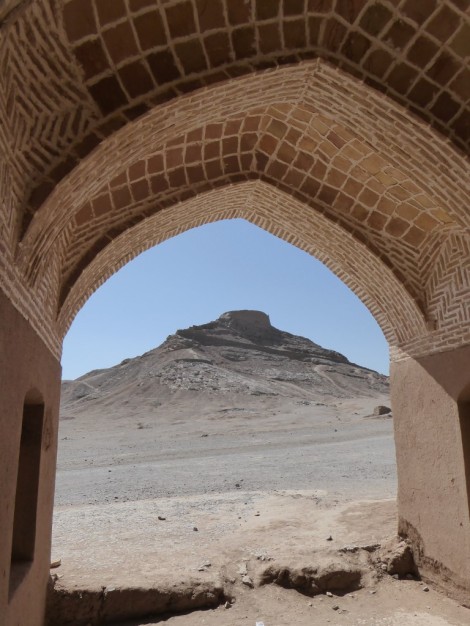 The towers were where bodies would be left for the vultures to dispose of and high walls prevented local animals taking the bodies away. I suppose the thought of vultures are barely manageable but no one wants to see their loved ones being dragged away by some jackal. 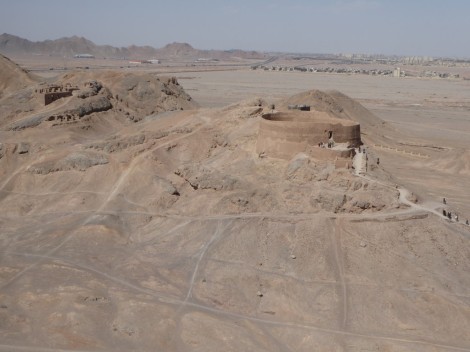 This practice continued until the 1960s when, under the Shah, it was decided that this was a health hazard and also bad for the image of an Iran looking to modernise. Zoroastrians now are sealed in concrete prior to burial, a modern solution to an old problem I suppose. 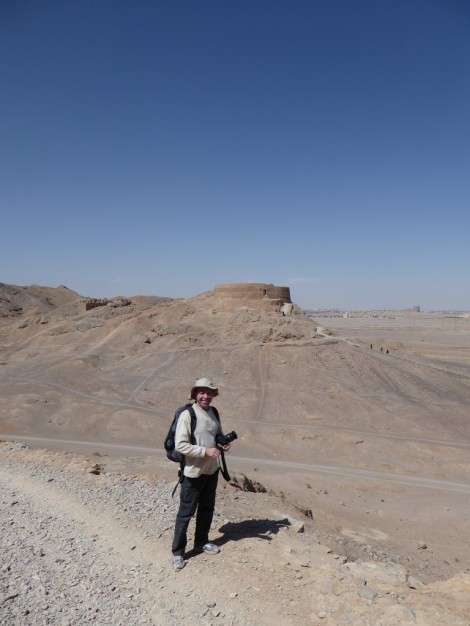 Patrick climbing up – luckily no vultures overhead any more

Further out from Yazd city on a half day circuit is the old caravan town of Kharanaq. Here the silk road trails from the Mediterranean worked through central Iran toward China. The Persian empire was at the core of these trades routes as the territory stretched from Central Asia all the way to Egypt and hundreds of caravanserai, rest stations for the caravan convoys, are peppered throughout the country.

Kharanaq with the decline of the silk road is long deserted but of mud brick and surrounded by iron red stained mountains and fields of wheat. 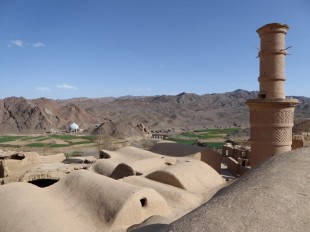 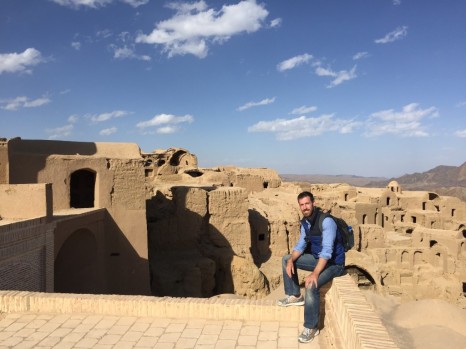 Further into the desert itself is the Zoroastrian pilgrimage site of Chak Chak (which means drip drip in Persian). Backed by a tall tale about a princess escaping into the mountain and providing a steady drip of water for passers-by. 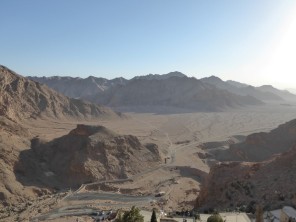 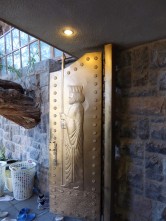 The prophet Zoroaster himself!

It had a great view but not much to see beyond where people would stay during a pilgrimage. Apparently women aren’t permitted when menstruating – just going to show that the major religions don’t have the monopoly on odd rules!

St Patrick’s Day in the desert in Iran is about as far as one can get from rainy and boozy Ireland but I managed to grab myself some alcohol-free beers with the Germans to toast the day. 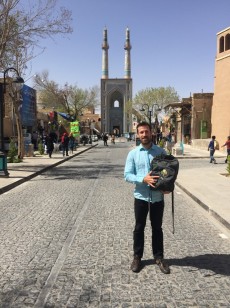 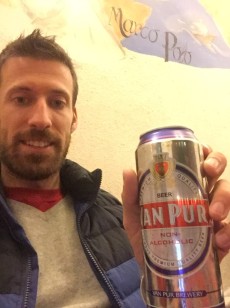