Starting from our overnight lodge overlooking the Serengeti we headed down for our second foray. It was a few hours before we saw our first hippo wandering on land, we’d seen these aggressive territorial animals before but in the water and thus just some nostrels, ears and eyes.

As soon as he departed we happened up three fine male lions, probably brothers since they were together, sitting in the sun and panting away.

They seemed supremely confident in themselves until I went to get up to take a better picture of one – as soon as they saw the human outline they were spooked. Somehow I managed to scare three lions! They then moved off into the long grass out of the view of these nosy intruders. Aisling was guilt-tripping the whole day that no-one would see lions that day!

It was however cats, cats, cats for much of the remainder of the day with another incredible find of two leopards in adjacent trees. One was out in the open while the other was lazing behind the foliage. I love this photo of the leopard with paws hanging down in the midday sun. 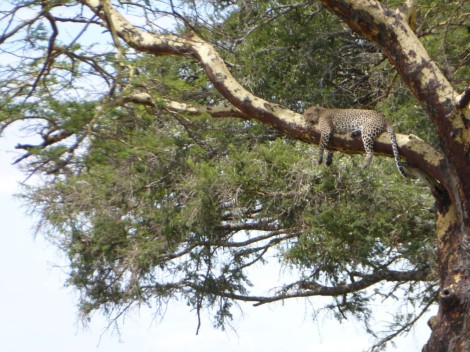 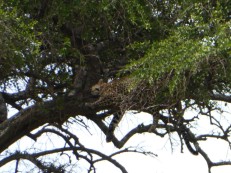 A few minutes down the road we saw a group of thousands of wildebeest running in a long line across a road until suddenly they slowed, stopped and congealed into a black mass of legs and horns.

The wildebeest regrouped suddenly on one side of the road

Then we hit upon the urgent reason – the scent of four lionesses napping under a tree about 100m away. Realising the commotion suddenly they were up and watching with amazing intensity 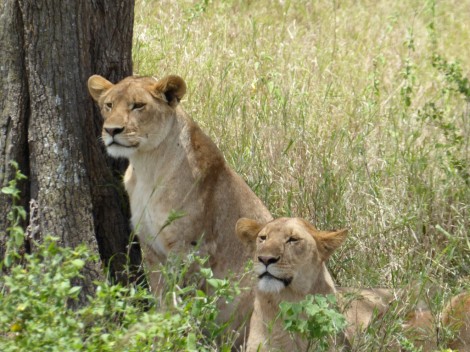 The wildebeest were in a quandary, they could smell lions but not see them and didn’t know where to go while the lionesses were too far away to attack – a standoff ensued for over an hour. We headed down to the herd and could see their difficulty, even when we knew where to look we couldn’t see anything!

While we had our lunch and watched we quietly hoped the wildebeest would make a break for it and see a chase but it wasn’t to be – the lionesses had gone back to napping while the poor herd nervously just stood there.

On our route back to our lodge this lone elephant, almost on cue, sauntered passed an Acacia tree in the distance. The level of wildlife and our luck was just ridiculous. 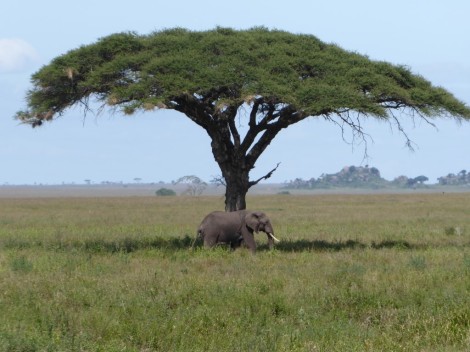